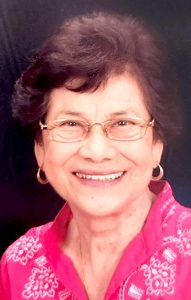 Guadalupe Morales Alvarez, 83, of Pearsall, died in her daughter’s home on Wednesday, December 7, 2022. She was born on October 16, 1939 in Tampico, Mexico to Matias and Juana Morales and moved to Harlingen where she met her husband, Adolfo Alvarez.

The couple settled in Pearsall where her husband was employed by a produce company in San Antonio. They later started A&A Auto Parts with stores in Pearsall, Dilley, and Cotulla. Thereafter, she embraced her role in public service alongside her husband, former Frio County Commissioner, Adolfo Alvarez. She strongly supported education, civil and voting rights and took an active role in local and state politics.

She leaves a legacy of love for family, devotion to her Catholic faith, and service to her community.

A mass will be held on Saturday, December 17, at 10 a.m. at the Immaculate Heart of Mary Catholic Church in Pearsall. Friends are invited to join the family for a funeral reception immediately following at the VFW Post 9195 in Pearsall.