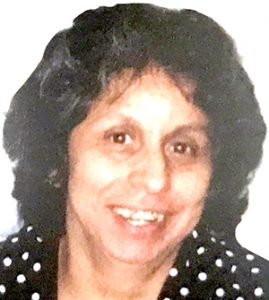 Chavela was the youngest of ten brothers and sisters. In her childhood, she enjoyed making wonderful memories with her siblings and cousins playing outside.

She married Clifton V. Gonzales in her hometown of Pearsall on July 29, 1978. The couple lived in San Antonio and had two children, Clifton Charles Gonzales, and Rebecca Camacho Gonzales Cavazos. Chavela was a stay-at-home mom and took pride in taking care of her family, ensuring home cooked meals were on the table each night.  She attended and volunteered at every event for her children. Throughout the years, Chavela often told her children stories of her childhood that included many memories with her parents, grandmother, brothers, sisters, cousins, and friends, growing up overall.

Chavela was diagnosed with a degenerative disease in 1995 and often told her family she was going to fight the disease and promised herself she would be able to stand up for her children’s graduation. She surpassed this goal and so many others and while able to care for her first grandson, Israel Nathaniel from birth until elementary school age; teaching him preschool and kinder concepts. Chavela was an active member of St. Monica’s Catholic Church. She attended weekly prayer groups and made many friendships through her faith. When Chavela was no longer able to attend services due to her illness, she and her husband watched the daily rosary and mass from home as her continued commitment to God.