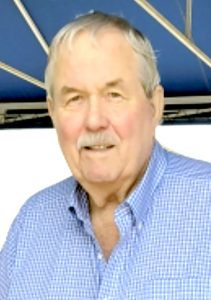 He was preceded in death by his parents.

Larry is survived by his wife Carolyn Gill, whom he has known since elementary school and been married to for the last 22 years. He is also survived by his daughters Kristin Jay (husband Jeff) who was raised by former wife Jean Webster, as well as Patricia York and Jennifer Parker (raised by and preceded in death by former wife, Ruth Malley) as well as seven grandchildren, Andrew (wife Adrianne), Kaleigh, Ashley (York), Bailey, Jaxon (Jay), Cameron and Teagan (Parker) and three great-grandchildren Carson and Preston (Andrew York) and Olivia Gaglione (Ashley York).

He grew up in Pearsall and other surrounding South Texas towns, but ultimately settled in San Antonio where he spent much of his life. Larry attended and graduated from Highlands High School and went on to attend college, graduating with a Bachelor of Arts degree in Architecture from The University of Texas at Austin in 1969. He was an accomplished architect, employed most recently with Harry Jewett Associates, but also respected independently as a self-employed custom home builder in and around the San Antonio Hill Country and beyond. Larry enjoyed hunting and fishing but golfing was a true passion of his. He played the game well, once shooting a coveted “hole in one” from the 14th hole of the course at the Laredo Country Club. Despite his 30-plus year career in architecture and engineering, the job he was most proud of was that of husband, father, and grandfather.

Graveside services were held on Monday, January 2 at 11 a.m. at the Appling Family Cemetery in Kingsbury, Texas with Reverend Dr. Robert Ortiz officiating.

In lieu of flowers, memorial contributions may be made to MDS Foundation or Wildlife Rescue and Rehabilitation-Kendalia.