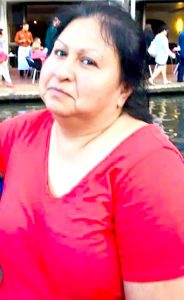 She is preceded in death by her parents and brothers Erasmo Cuellar and Ismael Gonzales.