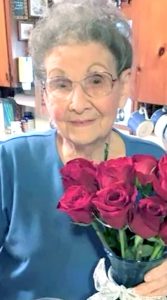 She is preceded in death by her parents, husband Byron Russell, and two brothers Andrew and Johnnie Giuffree.

Ann Russell has been a member of the Pearsall Baptist Church for the last 72 years and enjoyed working in the church and served in several ministries. One of her passions was making church banners and working in Vacation Bible School. Her favorite bible verse was Numbers 6:24 “May the Lord Bless you and keep you”! Ann owned and operated Pearsall Beauty Shop in downtown Pearsall for 40 years.

A public viewing was held Tuesday, September 20, from 5 to 7 p.m. at Hurley Funeral Home in Pearsall. Graveside services were held on Wednesday, September 21 at 10 a.m. at Pearsall Cemetery with a memorial service following at 11:15 a.m. at First Baptist Church in Pearsall with Pastor Brian Blackburn officiating.