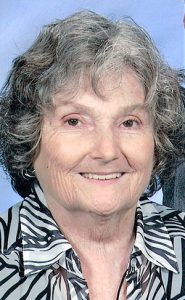 Judith Kay McCormick Stacy, 82, died on Tuesday, December 13, 2022 surrounded by her family at her daughter’s home. Judith, or “Judy Kay” as many called her, was born to Robert Leonard (Buster) and Ella Modiene McCormick on January 4, 1940 in Benavides, Texas.

She is preceded in death by her parents, her sister Lynda Jo, her brother John, her nephew Dannye Lane, and her grandson Austin.

As a child, she excelled in school and athletics and, according to her brother Danny, she could run a 40 faster than all the boys in high school.

Her family moved to Pearsall in 1954 and shortly after that, she met her future husband of 64 years, Johnny Roy Stacy in high school. High School sweethearts, they married August 10, 1958, only a couple of months after high school graduation. They had nine children, five sons and four daughters.

Judith was a self proclaimed sports fanatic and one of her greatest joys was watching her children and grandchildren compete in football, basketball, volleyball, track, baseball, tennis and performances in choir and plays. She was known for a keen eye on statistics and you could always find her with a notebook keeping encrypted shorthand stats that no one but her could understand.

She served as director of an afterschool program, encountering many young lives with a willingness to serve others.

Visitation was held on Friday, December 16 at the Hurley Funeral Home Chapel in Pearsall from 5 to 7 p.m. A funeral service was held at the First Baptist Church in Pearsall on Saturday, December 17 at 10 a.m. Interment followed in the Pearsall Cemetery.