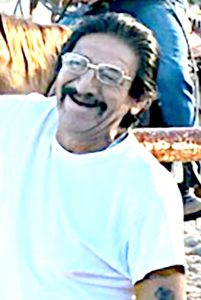 Carlos Rogelio Medina died on May 23, 2020 at the age of 60. He was born on February 15, 1960 to Carlos and Alicia Medina.
He is preceded in death by his parents and his brother Lorenzo Medina.
Medina is survived by his son Carlos Clark, grandchildren Illeana Medina, Carlito Medina, Benny Medina and Cataleya Medina, siblings Nelda (Jose Angel) Gonzalez, Minerva (Perfecto) Delgado and Alejandro Medina. He is also survived by numerous nieces, nephews and other relatives.
Visitation were on Thursday, May 28 at Peters Funeral Home from 4 to 9 p.m. with a Prayer Service at 7 p.m. Funeral Services were held at Peters Funeral Home on Friday, May 29 at 10 a.m. Interment followed at the Encinal Cemetery.
Pallbearers were Joe Gonzalez Jr., Jorge Gonzalez, Jason Gonzalez, Lorenzo Medina Jr., Carlos Clark, Joaquin Medina and Jimmy Guargiola.
Funeral arrangements were under the direction of Peters Funeral Home, Cotulla.