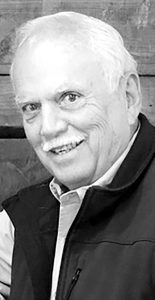 Harvey Clifton “Cliff” Moffett, 79, formerly of Dilley, died on April 1, 2021 in Nashville, Tennessee surrounded by his children and oldest grandchildren. He was born on May 21, 1941, in Dilley to Theodore “Ted” and Theodosia “Theo” Moffett.

He is preceded in death by his parents, brothers Ted, Bob, Lane, and Frank, and his sister Amy Lou.

The youngest of seven children, he grew up on a farm in Dilley and went on to play basketball for Southwestern University in Georgetown. He spent the majority of his adult life in Texas and started with running a service station in college, then teaching and coaching, and later filling many roles in the hospitality industry whether catering events, building restaurants, hosting parties or serving customers of many kinds, primarily in Austin.

A memorial service was held Saturday, May 29 at 11 a.m. at Covey Chapel Cemetery in Frio County and a luncheon followed at Pacho Garcia’s in Dilley.