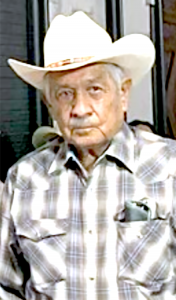 Jose Martinez Huerta, 83, of Pearsall, died on September 6, 2021 in San Antonio. He was born on September 11, 1937 in Mexico to Pablo Martinez and Epgmenia Huerta Martinez.

He is preceded in death by his parents, brothers Ruperto Martinez, Bejamin Martinez, Efrian Martinez and Imelda Martinez, all of Mexico.

Services were held on Tuesday, September 21 in the Trevino Royal Oaks Funeral Home chapel from 3 to 9 p.m. with a Rosary at 7 p.m. Mass was celebrated on Wednesday, September 22 at the Immaculate Heart of Mary Catholic Church at 10 a.m. Interment was held at the Panteon Boquilla De Abajo, Canitas De Felipe Pescador in Zacatecas, Mexico.