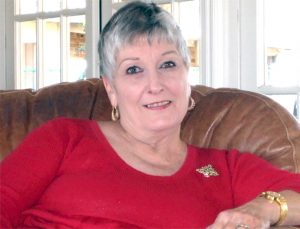 Kathleen Whicker Daughtrey, 82, of Cibolo, Texas, died on October 14, 2021. She was born on March 6, 1939 in Raymondville to William Earl Whicker and Lila Mae Davis.

She is survived by her husband of 47 years A.B. Daughtrey Jr., son Corey and wife Angie and their daughter Erika of El Paso, daughter Lori and husband Scott Struik and their daughter Zoe of Austin, and daughter Jennifer and husband Michael Hicks and their son Max and daughter Maya of Austin and two great-grandchildren Wyatt and Ellie of El Paso. She is also survived by her three brothers Bill, Leslie and Mike Whicker and many aunts, uncles, cousins, nieces and nephews.

She was the oldest of four children and the only daughter. Kathy grew up in Corpus Christi and graduated from W.B. Ray High School in 1957. She attended Del Mar Junior College and soon after moved to Pensacola, Florida to be with family. After a few years, Texas called her back where she accepted a position at Central Power and Light in Corpus Christi. Kathy was an avid bowler and met her husband A.B. on a blind-date at a local bowling alley set-up by a mutual friend and colleague. Kathy and A.B. walked down the aisle to “We’ve Only Just Begun” by the Carpenters as they were married in the Cotulla Church of Christ on April 27, 1974.

Kathy and A.B. spent the next several years raising their three children living in Pearsall, Laredo and Cotulla. In 2002, A.B. retired from AEP (previously CPL) and they soon after moved to Whitney where they lived for 11 years until moving to Cibolo in 2014.

She enjoyed crafting, reading and planning family get-togethers. Kathy had a deep faith and enjoyed time spent with her church family.