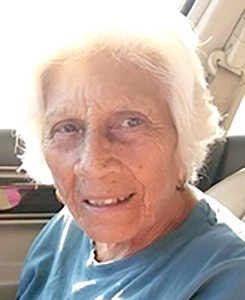 Emma C. Gonzalez, 89, of Pearsall, originally of Encinal, died on February 7, 2022. She was born in Encinal on July 22, 1932 to Lazaro Gonzalez and Aurora Castillo Gonzalez.

Emma was a lifelong resident and servant of Encinal and worked the fields as she picked cotton, sandia, melon, pepino, tomate, sevoya, and sweet potato at the church with Monsignor Bartocsh. Working took her all over the country with “Apa” Lazaro Gonzalez. She helped with the hogs the family raised and even tossed hay bales a time or two. She served the church for decades and was well known in and around Encinal. She served as the church sacristan for decades, kept the books at the church, ironed the vestments for at least four priests, set up the Communion bread, chalice for communion, the water and the wine for Sunday mass, weddings, burials, and special masses along with providing information for arrangements. She kept the altar boys in check and did the housework for the rectory. She also enjoyed hunting with Mgsr. Bartocsh.

She worked for the Cotulla Independent School District for at least a decade, driving a bus full of kindergartners and special needs children from Encinal to Cotulla and back. On one of those trips, she was hit by an 18-wheeler and was able to maneuver the bus in an effort that avoided any fatalities.

A memorial service will be held at a later date.