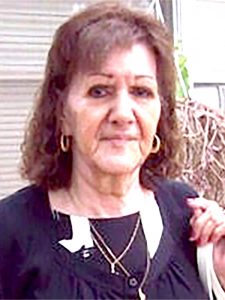 She is preceded in death by her parents, her husband of 50 years Elias Chapa, younger brother Pascual “Junior” (Guadalupe), and baby brother Oscar.

Visitation was held on Friday, February 18 at Trevino Royal Oaks Funeral Chapels in Pearsall from 3 to 9 p.m. with a Rosary recited at 7 p.m. Funeral mass was celebrated on Saturday, February 19 at 10 a.m. at the Immaculate Heart of Mary Catholic Church. Interment followed at the Dilley Cemetery.