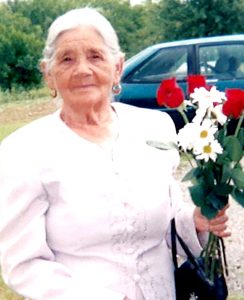 Petra Manzanares, 102, died on November 19, 2022 in Pearsall surrounded by her family. She was born on April 2, 1920 in Mexico to parents Mercedes and Maria Orozco.

Visitation was held on Tuesday, November 29 from 5 to 9 p.m. with a prayer service at 7 p.m. at Hurley Funeral Home Chapel in Pearsall. Funeral services were held on Wednesday, November 30 at 10 a.m. at Church of Christ in Pearsall. Interment followed at the Pearsall Cemetery.

Anyone wishing to leave condolences, share memories, or sign the guest book can do so at www.hurleyfuneralhome.com