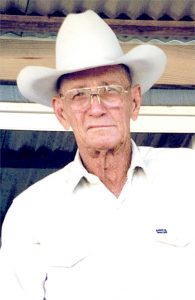 Although he considered Cotulla home, he still had strong ties to Medina County, especially Black Creek, his home as a youth and at times, his early adulthood. He also had many family members in the area. He worked many jobs, but most enjoyed being on the back of a horse, looking at cattle.

Later in life, when sitting on a horse wasn’t feasible anymore, Dub could be found in the local coffeeshops and restaurants regaling people with stories from years gone by.

Viewing and visitation was held at Peters Funeral home in Cotulla on Wednesday, December 7 from 4 to 9 p.m. Services will be held on Thursday, December 8 at 10 a.m. at the First Baptist Church in Cotulla. Interment will follow at the Cotulla Southwest Cemetery.