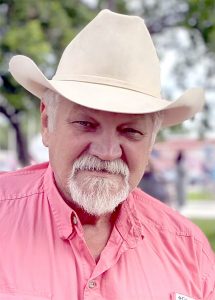 He is preceded in death by his parents, sisters Betty Jean Hawkins and Mary Lea Harper.
Calvin is survived by his wife of 51 years, Phyllis Rhea Richey Varnon, daughter Amanda Catherine VanCleve of Pearsall, daughter Victoria Tedder and husband Jed of Mason, son Calvin “Cody” T. Varnon III and wife Ve Denise of LaPryor, son Prentiss L. Varnon and wife Tiffany of Easley, South Carolina, grandchildren K.O. Witt and Katy Rhea Tedder, Calvin T. “Cuatro” IV, Cashlyn, Liam and Emma Jane Varnon and Madelyn, Eli and Ethan Varnon, youngest sister Monte Del Varnon of George West and numerous nieces and nephews.
Calvin was a farmer, rancher, cowboy, pilot, truck driver, father, and grandfather. He enjoyed educating not only his children, but everyone he came in contact with.
He went to schools in Floresville, Charlotte, Cotulla and then graduated from Dilley High School in 1968. He served in the US Army stationed at Ft. Bliss, Ft. Ord and Nuremberg Furth – Bavaria, Germany, and traveled many places in Europe during the Vietnam Era. He valued his time as a driver for his Colonel and completed many special operations that he didn’t speak much of. Calvin married Phyllis Rhea Richey in 1971 and had they had four children. His passion was farming with his father and family, growing some of the best watermelons in South Texas including in Frio, La Salle and Webb Counties. In the early 70’s he mined and engineered a smelting plant in Mexico and later farmed in Venezuela. In the 1980’s he had a full service, oil & gas operations business, CTV Services. Calvin liked to ride and train horses and raise sheep and goats throughout the years. He also spent many years on the road all across the country hauling cattle, produce, and freight as an independent contractor. After a car crash in 2004, he slowed down a bit and started helping his son with his hat business and helped raised two of his grandchildren.
He was a member of the Masonic Lodge 892 in Cotulla – and the Rueben Wilson American Legion Post 409.
Graveside services were held on Tuesday, December 20 at Covey Chapel Cemetery at 11 a.m.