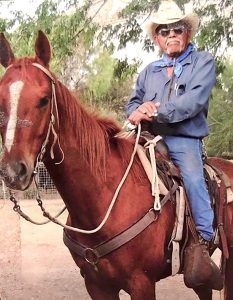 Rogelio Gonzalez Sr., 83, of Cotulla, died on October 27, 2020 at home surrounded by his wife and children. He was born on September 17, 1937 in Guerra, Texas, to Guadalupe and Adela Gonzalez.

He is survived by his wife, children, sisters Josefina Lumbreras and Gloria (Raul) Muriel, sisters-in-law Julia, Melli and Juanita and his fellow cowboys, his brothers-in-law Louie, Sonny, Victor, Mage, Benito and Richard Valenzuela and 16 grandchildren and 26 great-grandchildren.

As a life-long vaquero known in Cotulla and through South Texas to Hebbronville, Gonzalez enjoyed horseback rides and lessons in horsemanship. He was an employee of the Texas Highway Department for 28-½ years.

In accordance with his wishes, he will be cremated and there will be no funeral service. A celebration of his life will be held privately.