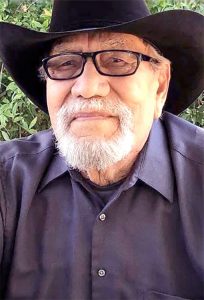 Guadalupe (Lupe) Garcia Jr. “El Ganzo”, 80, from San Antonio, died on November 18, 2020 at his home, surrounded by his family. He was born September 20, 1940, in Eagle Pass to Guadalupe Garcia Sr. and Catalina Becerra Trejo.

Lupe married Maria Roman on May 30, 1959 in Cotulla and the couple of 62 years started their lives together as migrant workers. Lupe also worked at a plant nursery, road construction and retired as a truck driver.

Lupe had a grade school education which did not hold him back from learning and teaching himself over the years. He was an avid fisherman and his fishing gear collection was vast and included some of the best gear available that he bought at sports stores or flea markets. He was also a handyman that worked on bikes, lawnmowers, cars and pretty much anything with a motor. He was also handy in the home, repairing electricity, plumbing and doing all sorts of general construction. He operated heavy equipment at most of his jobs and taught himself English for the names of thousands of plants that helped his work at the nursery. At home, his green thumb could make anything grow and his flower garden or vegetable garden was always full.

He enjoyed the outdoors, cooking and barbecuing and was know for his borracho beans

Graveside services were held on Saturday, November 21 at 11 a.m. at the Cristo Rey Cemetery in Cotulla.